1972 The Honolulu Academy of Arts. 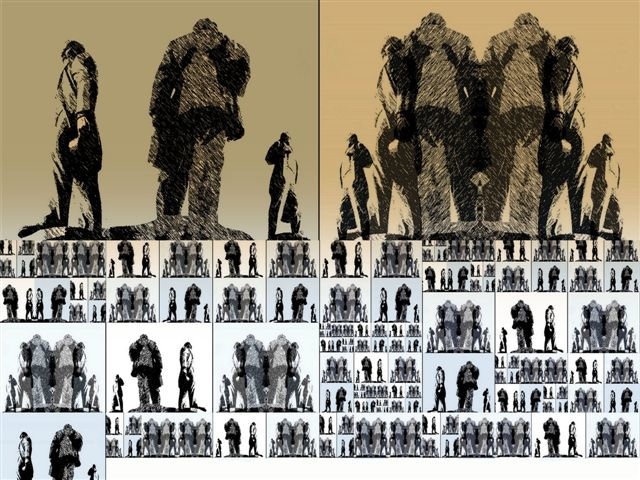 Barry Cleavin has lived in Christchurch since 1963. He is a full time practitioner of his chosen art forms and was a senior lecturer in Printmaking at the University of Canterbury form 1978 to 1990. He has received very prestigious awards for his art making including the Fulbright Fellow at The Tamarind Institute of Lithography, Albuquerque in 1983, awarded the New Zealand Order of Merit (ONZM) in 2001 and awarded Doctor of Letters, University of Canterbury 2005.

For the last couple of years I have used my chosen mediums as an escape from this city’s misfortunes – seismic and social. The conclusions are intentionally ‘graphic’ as I try to unpick events and changes of circumstances. My disposition has been directed more and more towards story telling of a cautionary kind – some more, some (much) less successful. My ‘Golums of Christchurch’ etchings of a year ago were too broody.

It is then at my age, drawing, printmaking and painting manifests itself as a catharsis not laced with a young mans lateral adventures. I enjoy the pens, inks, paints and printmaking processes as much for themselves as for what they allow me to do.

Printmaking – my ‘inner world’ has always provided me with an ‘outer world’ and communication with others of my ilk via correspondence and the various exotic Biennales. I still consider the print as the last bastion of creative democracy – a way to communicate ‘actually’ rather than ‘virtually’ with a product that has as much to do with reading, as it has to do with its presence on the Fine Art ladder.

Such events as the Christchurch Sendai Project’ provides an ideal forum for a printmaker – significantly – some interaction with islands beset with natural events related to our own. Then, of course participating with Japan, the country with printmaking and storytelling imbedded in its psyche.

Any printmaker with an empathy for what it is that the print represents has a spiritual and technical bond with like minded and skilled practitioners. The Japanese woodblock print defines what in beauty and depictions of social history the print is capable of. There will be those devoted to ‘the way of the print’ in Sendai. It is then that there will be those there, as is the case with those here that are here taking refuge in their print medium of choice to continue telling the stories that we must tell. If not about earthquakes then other matters that demand our attention.

Whatever the means or mode – to celebrate the continuance of ourselves and our communities.

Little Prelude uses the more traditional forms of intaglio (aquatint and etching) printing while The Founding Fathers Go Looking for Christchurch employs contemporary digital manipulation techniques restricted to the size of an A4 paper size, perhaps due to the size of his printer.

When asked to discuss Little Prelude, Cleavin responded, “For me, music is as great in its attributes to me as is drawing. I take enjoyment and solace from both. In a series related to the Canadian pianist Glenn Gould (now deceased) I have drawn extensively while listening to his interpretations of J.S.Bach. I have found drawing and music to be great medicines to take as antidotes to earthquake attacks.

What do you think the title The Founding Fathers Go Looking for Christchurch could imply in light of the recent earthquakes? And what is the significance of repeating and changing scale of the images in the work?

Bearing in mind that both Cleavin’s images were made in after and in response to the earthquakes, can you identify similarities and differences the two images?